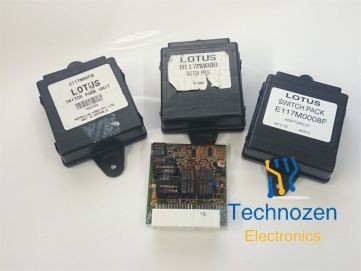 The Switch Pack Module is fitted to all Series 2 versions of the Elise.

The first generation module has the part number A117M0008F and the latest version has the part
number E117M0008F.

All modules are backward interchangeable irrespective of the part number, there are five part numbers for this module and all that has changed throughout production is the internal electronic design.

Early designs were based on discrete logic IC's and later designs are microprocessor based.

The module is responsible for switching and/or controlling the following circuits;

The "E" version module had the added function of daytime running lights, as this function wasn't part of the A to D modules it should be noted if an earlier unit is being used as a replacement.

I can repair all faults except for processor failure, which is thankfully a rare occurrence!

If your module is found to have a processor related fault there will be no charge except for return delivery.

As with all of the repairs I do I have a custom test rig which allows me to test all functions "off vehicle" and all spare parts are kept in stock to allow an immediate repair.

Common faults include relay failure, circuits switching on and staying on and random circuit activations.

One repair charge covers the repair of any fault and includes return delivery.